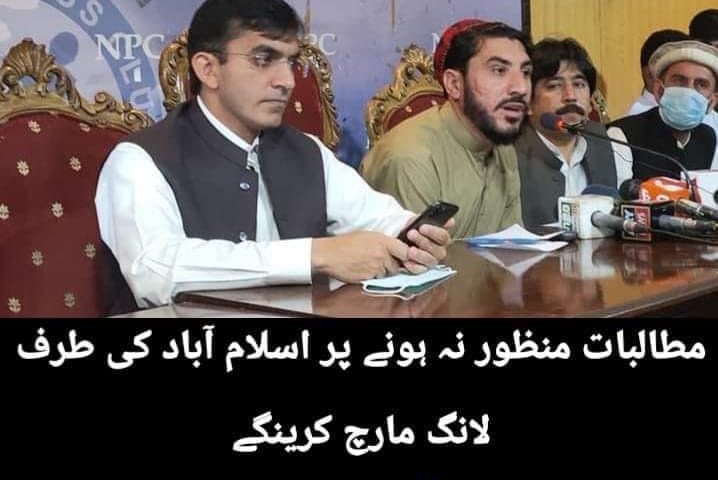 Manzoor Ahmad Pashteen, head of the Pashtun Protection Movement (PTM), has demanded a PAKHTUNKHWA, extending from Chaman to Chitral bringing all the Pashtuns dominated regions of Pakistan into one unified unit.

Pashteen made this demand while addressing a press conference at National Press Club, Islamabad. He threatened a long march to Islamabad if the demands are not met, but declined to announce a date. “The Pashtun nation has enough of the atrocities against them and their patience is running out.” He said.

The PTM chief added that the federal government and state agencies had arrested hundreds of PTM workers and leaders while the opportunities for dialogue had been deliberately squandered by Pakistan Army. He added that people like Ali wazir who advocate peace and human rights are languishing in jails while war mongers are roaming around without any problem in Pakistan.

Making reference to media black-out of Pashtuns and particularly PTM he said that if media coverage is not given to his press conference in main stream media, he will request PTM foreign chapters around the world to hold press conferences about the human rights violations and atrocities committed by the state of Pakistan against Pashtun ethnic minority.

Earlier, a protest rally of Jani-khel tribesmen and relatives with dead bodies of four teen-aged boys aged between 13 to 17 years reached the city of Bannu despite heavy handed tactics of Police using bullets and tear-gas on them. The victims were identified as Ahmadullah, Mohammad Rahim, Razamullah, and Atifullah. thousands of Pashtuns from all parts of Khyber Pakhtunkhwa joined the rally condemning the State policy of sponsoring and financing Talibans in the former FATA. These boys were abducted by Local Taliban proxies of Pakistan Army a couple of weeks ago. According to confirmed reports the boys were subject to extreme torture and sexual abuse before being killed. The rally was terminated at Bannu city, when demands were accepted by the Provincial government and high-ranking military officials.

It is to be noted that Pashtun minority in Pakistan is extremy angry over the atrocities, gross human rights violations, war crimes and crimes against humanity committed by Pakistan army and want those responsible to be made accountable. A volcano is about to erupt if their just demands are not met. If these issues are left un -solved, it will have serious repercussions for the peace and stability of the region.