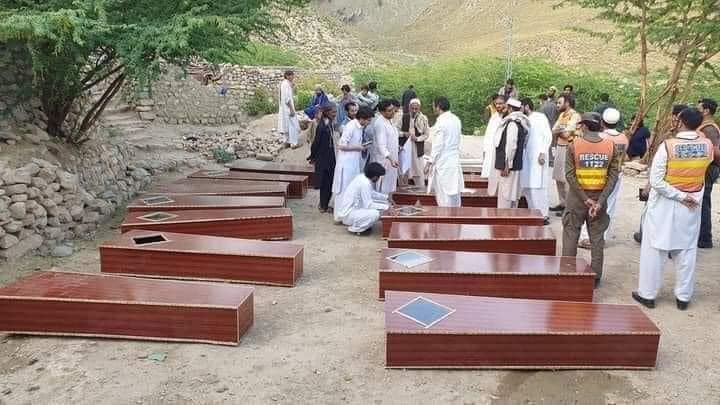 Today on April 09 2021, teams of rescue workers, political figures and personnel of Pakistan Army excavated a mass grave in Gulu Tangai area ( inaccessible by any road and other infrastructure, situated between Toor Chappar, Pastawani & Jawaki F.R Kohat, Khyber Pakhtunkhwa), former camp of Taliban, proxies of Pakistan Army, where mass execution of innocent Pashtuns took place with the help and connivance of Pakistan Army.

According to information received from local sources around 16 bodies were recovered from one of the mass graves and taken away by state agencies. The pretext for this excavation was made that they were looking for the bodies of coal-miners abducted in September 2011 and later killed by Taliban led Tariq Afridi Group. But, actually Army wants to remove evidence from United Nations which wrote a letter to government of Pakistan about the above mentioned camp and reported mass graves. According to informations a Polish Engineer was also killed at the same camp in February, 2009. He was not killed in Waziristan as shown in media. He was later transferred to Waziristan after being killed at Gulu Tangai.

According to sources, on September, 29, 2011, 32 coal miners were abducted by un-known persons (Taliban+Army) from Kala Khel area of Tehsil Bara, district Khyber, Khyber Pakhtunkhwa. Later, 16 of these coal miners succeeded to run away from the aformentioned camp. The destiny of the the rest of the 16 coal miners remained a mystery and were treated as missing by Pakistani authorities. The locals believe that there are still many mass graves to be un-earthed in the days to come if the area is excavated. Another mass grave containing 30 bodies is discovered in the same area and the excavation teams are there to remove the bodies from the grave.

We demand United Nations and international Community to raise this issue with the state of Pakistan and establish a UN led Commission to investigate these gross human rights violations, war crimes and crimes against humanity committed by Pakistan Army.