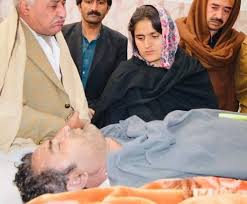 We the representatives of Pashtun people and office bearers of Pashtun Protection Movement (PTM) in Europe, strongly condemn a pre-planned extra-judicial killing of Prof. Mohammed Ibrahim Loni alias Arman Loni by the Security Agencies of Pakistan. Mr. Loni was  one of the main leader of PTM and well known human rights activist, fighting for the rights of Pashtun People.

On February 2, 2019 while he was protesting against the Taliban suicide attack on Police personnel in the Loralai District of Balochistan, was arrested by an Assistant Superintendent of Police (ASP) Atta ur Rehman. The said ASP ordered his subordinates to kill him. Later, he (ASP) himself thrashed Arman on his head and neck with his rifle, which resulted in severe injuries and he fell unconscious.

Furthermore, the same ASP, stopped the friends of Arman to take him to the hospital by blocking their car with his official Jeep. So, there was clear intention and determination on the part of Security personnel to kill him. Later, he succumbed to the injuries and died before his arrival at the hospital.

On February 3, 2019, the provincial government of Balochistan issued a notification  banning Manzoor Pashteen, the leader of Pashtun people and a renowned human rights Activist, along with Ali Wazir and Mohsin Dawar (Members of National Assembly of Pakistan) to enter Baluchistan to take part in the funeral prayers of Arman. On the same day, the ISI agents chased the car of Manzoor Pashteen and opened fire on him but remained un-hurt.

In the so-called war on terror, Pakistani military has killed more than 75000, disappeared 32000 and displaced more than 6 millions Pashuns in Khyber Pakhtunkhawa in the last 17 years.

Such inhuman and fascist acts by the Deep State of Pakistan have shocked us which are in clear violation of the article 15 of the constitution of Pakistan and Article 13 of the Universal Declaration of Human Rights of 1948 which guarantee everyone’s right to freedom of Movement. Earlier, Manzoor Pashteen was banned to enter and organize rallies in the Sindh Province of Pakistan. On November 30, 2018 the same above mentioned two MPs of Pakistan who happened to be the Members of PTM were put on Exit Control List and barred from leaving the country without court orders. On December 12, 2018 two websites of VOA were blocked by Pakistani authorities as punishment for covering the stories of Pashtun People and PTM activities which is aimed at muzzling our freedom of expression.

PTM is a non-violent movement and a voice of millions of Pashtuns has not violated any law of the Pakistan. We demand a peaceful and dignified life for our fellow Pashtuns.

We are demanding our basic fundamental Human Rights as guaranteed by International Humanitarian Law, UN declaration of Human Rights and other relevant conventions and treaties to which the State of Pakistan is a signatory.

Keeping in mind the bad track-record of Pakistani law enforcing agencies particularly ISI & MI which are involved in abductions, torture and killing of innocent civilians, we fear for the lives of the main leadership of PTM.

We, therefore, request to all the civilized countries of world, International Human Rights Organizations and United Nations to take notice of the extra-Judicial killing of Prof. Arman Loni and the firing incident on the leadership of PTM and put pressure on  Pakistan’s government to refrain from any adventurism and attack on PTM leadership particularly Manzoor Pashteen, which may plunge the country into chaos and civil war like situation.