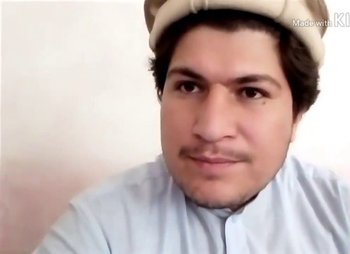 We the representatives of Pashtun people and office bearers of Pashtun Protection Movement (PTM), strongly condemn the arrest of Alam zaib Mehsud a Human rights activist and leader of PTM in the Karachi port city of Pakistan.

Mehsud, 28, was arrested on January 21 after local police named him and 15 other activists PTM in First Information Report (FIR) for criticizing the country’s powerful military for not acting on their demands for the arrest of RAO Anwar, a police officer responsible for extra-judicial killing of Naqeebullah Mehsud.

He is a focal person of  the PTM for documenting enforced disappearances and highlighting the plight of victims of landmines in Khyber Pakhtunkhwa inhabited by 30 million Pashtuns.

In the so-called war on terror, Pakistani military has killed more than 75000, disappeared 32000 and displaced more than 6 millions Pashuns in Khyber Pakhtunkhawa in the last 17 years.

Keeping in mind the dismal track-record of Pakistani law enforcing agencies particularly ISI which is involved in this arrest, we are concerned about the physical and mental safety of Mehsud. We strongly believe that Human rights defenders and civil society should be able to express their opinion freely and dissent without fear of reprisal.

We, therefore, request to all the civilized countries of world, International Human Rights Organizations and United Nations to take notice of this illegal arrest and detention of Alam zaib Mehsud  and put pressure on  Pakistan’s government to immediately and unconditionally release Alam zaib Mehsud and other PTM workers arrested for peacefully rallying in Karachi.