PTM Europe Holds Protests Against Pakistan all over Europe

Persecution Of Pashtuns In Pakistan Highlighted In Geneva 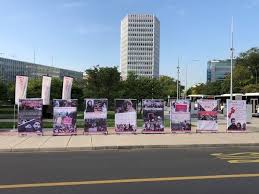 Kabul- The European Organization for Pakistani minorities has displayed a photo exhibition in front of United Nations office in Geneva on Pashtun Long March which took place after the killing of Naqeebullah Mehsud, a 27-year-old shopkeeper, of Pashtun origin on January 13, 2018.
This is one manifestation of the misery heaped on the Pashtuns through the systematic proliferation of violence and extremism by the state over the years.
The Pakistani state security institutions claimed that Naqeebullah was associated with the Taliban. The incident was criticised by the Pashtun community worldwide, though it is not the first time such an act of brutality took place against the minority community in Pakistan.
Nonetheless, after 71 long years of suffering, Pashtuns voiced their demand for justice in form of the ‘Pashtun Long March‘, a nonviolent protest in Islamabad.
The crowd put forward demands including justice for the family, the punishment of the guilty, stopping the extrajudicial killing of Pashtuns in Pakistan, removing land mines in FATA, and releasing abducted persons and the prisoners who are innocent.
The Pashtun Long March marked a watershed moment as it is the first time in Pakistan‘s modern political history that witnessed a large-scale mobilisation of Pashtuns drawing on the creed of nonviolence.
Pashtuns are seen as predisposed to violence; Bacha Khan and his legacy have been seen in the contemporary context as a historical aberration. This holds out hope for the possibilities of non-violent political mobilisation in a region regarded as being synonymous with terrorism and extremism.
The European Organization for Pakistani Minorities has demanded that Pakistani authorities must end the illegal harassment and intimidation of journalists and activists.
“In an ideal world, the Pashtun Long March wouldn’t have been needed for justice to be served, but the citizens have raised their voice,” said a press statement by the organisation.
The Pashtun long March has been transformed into Pashtun Protection Movement (PTM), leading by Manzoor Ahmad Pashteen.  PTM staged a  number of public gatherings in almost all big cities of Pakistan in which it unmasked and hit out the country’s military establishment for its inhuman brutalities across the Pashtun belt in Pakistan, on the pretext of war on terror.  Moreover, PTM activists also organizing protests and events across the European countries and US to attract global attention against Pakistan’s state terrorism on both sides of the Durand Line.
It’s time for the big powers and all humanitarian forces to come to the fore and held terrorists and terror sponsor States accountable to make the region and world free of terror.