National tribute to the victims of terrorism 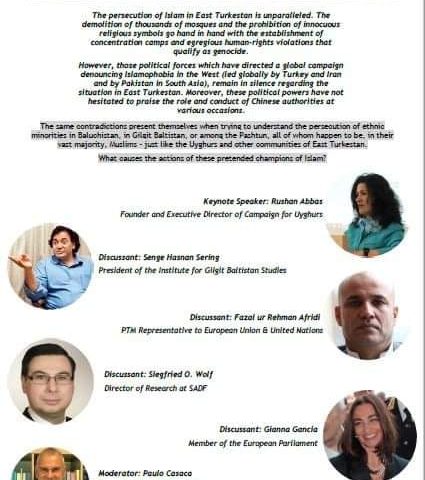 On 8 October 2020, the South Asia Democratic Forum (SADF) hosted a webinar on ‘Persecution of Islam in East Turkestan’. The Webinar featured as Keynote Speaker Rushan Abbas, Founder and Executive Director of Campaign for Uyghurs, and as Discussants Senge Sering, President of the Institute for Gilgit Baltistan Studies; Fazal ur Rehman Afridi, PTM Representative to European Union & United Nations; and Siegfried Wolf, Director of Research at SADF. The webinar was moderated by Paulo Casaca.

The Webinar addressed the unparalleled persecution of Islam in East Turkestan – with the demolition of thousands of mosques and the prohibition of innocuous religious symbols going hand in hand with the establishment of concentration camps and egregious human-rights violations which qualify as genocide -, as well as the role of the political forces who have directed a global campaign denouncing Islamophobia in the West, in this present crisis.

SADF is grateful to the distinguished guest speakers for their contribution to our Webinar Series. We leave as well a ‘thank you’ to all who joined us from all over the world via our live stream.